×
Jump to Recipe -
This Potato and Ham Ragu works great as a main dish serve with some garlic bread, but also makes a terrific side dish.

Ham and a rich creamy sauce that is flavoured with brandy, oregano, garlic and leeks turn potatoes into a gourmet dish.  I used fresh baby potatoes in my recipe, you can't beat that fresh from the garden taste, but if those aren't available any type of potatoes will work cut into bite size pieces. Here are some step by step photos to help prepare this recipe. Cut potatoes into chunks and add to pan. Stir in brandy, chicken stock and oregano. Cook until potatoes are tender. Add cream and fresh parsley, season with salt and pepper. Serve as a main course with some fresh bread or as a side dish. 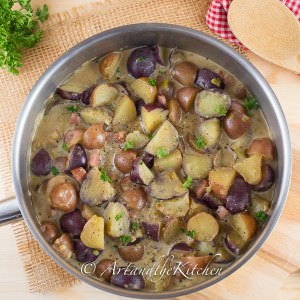 *The Little Potato Company supplied me with the potatoes for this post.